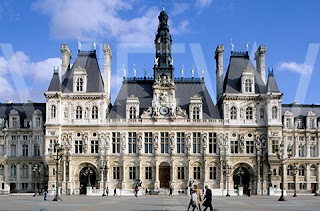 Nothing Is Too Good For The People's Councillors!

Early this year I noticed a vacancy being advertised in the local free sheet, silly title but effectively chief number-cruncher for the local council. Rather less money on offer than I'd like, but a whole lot better than Job Seekers - and I suspected a whole lot less hassle in many ways than in the private sector. So I applied, filled in endless pages on-line, and was granted an interview.

To prepare for this august occasion - even though it was in January! - I went along to the council offices and blagged a copy of their latest financial statements. This itself appeared to cause shock-waves, a member of the public wanting a copy of their accounts!! Whatever next???

I then spent a couple of days going through these so-called financial statements, and nearly ruined a red pen. To say they were full of mistakes - even without having access to the data behind them! - would be an understatement. Apart from the grammatical nonsenses, there were pages of numbers not adding up, inconsistent with other tables on other pages, and even completely contradictory stuff within the same set of numbers. Without wishing to be completely boring, here's an illustrative example; if you have a depreciation rate for a category of fixed asset of 33% it means that you write any purchases of that class of fixed asset off over three years - yet here we had exactly the same figure for additions as for depreciated charged in the period.

Had I produced such a pile of festering garbage even as a first draft several of the folk I reported to would have torn my head off and shoved it (metaphorically!) where the sun never shines. Such rubbish would NEVER have been put forward to the board, let alone signed off and published. And where were the useless auditors in all this?

I kept my trap shut at the interview. Probably luckily I did not get the job. 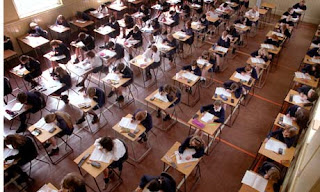 Just before the "Work Programme" or whatever it is (was) called forced the senior people at the Job Centre to farm me out to various external providers for "expert help" in getting back into the work-place, I was told to apply for a position as "Executive Officer, Department of Work and Pensions" which was being advertised.

In order to keep officialdom happy, I applied. Then I was sent along to some Assessment Centre to sit a Literacy Test and a Numeracy Test, designed to ensure that the candidates for this role - or roles, I was told there were several - could read, write, and do basic arithmetic. I had to take along my passport and a couple of passport-type photographs, and found myself sat in hired offices along with 30 or so other applicants, and about a dozen "consultants" from Manpower. The tests were about the standard of the old 11-plus. I asked if I could use my own calculator, but this was not allowed as it might be conferring an advantage. We all had to use the pencils, paper, and calculators provided. Probably a good supply contract to have!

After the tests we sat there while they were marked, and those who had not reached the requisite standard were asked to leave. Only 6 of us were left. I was a bit shocked, and asked what the "pass marks" were. They were about the 40% mark. They told me I had managed 100% in both and would not need to resit them if I applied for any other Civil Service posts in the future as they would remain "on the record". One of the Manpower consultants condescendingly told me I would not have done any better with my own calculator, and I pointed out that I would have been a bit quicker.

Then a few weeks later I was asked to return to these rented offices for a "Competency Based Interview" with two senior consultants, where I was asked to illustrate from my own experience how I would cope with the basic and the obvious. Having overcome this hurdle, I was told that I would be hearing from the DWP in due course once they had run a CRB check to see if I had been caught doing inappropriate things with goats.

Eventually a letter arrived from the DWP recruiting centre in some North East Vote-Buyer Town, informing me that congratulations were in order, and that if a vacancy should occur within the next six months they would be in touch. After that time I was to consider myself at liberty to re-apply if I saw any vacancies advertised.

I still wonder at the money this whole pointless exercise must have cost. 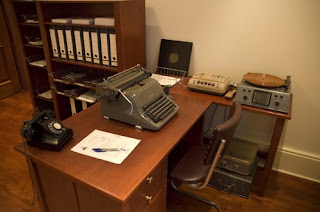 One of the irritating things about the screening process that the agencies are adopting on behalf of their clients is the "Accounting Package" issue.

"Do you have extensive up-to-date experience of Shitecraft 500?"

"Well, I've been unemployed for quite a while so it rather depends on what you call "up-to-date". And, I have yet to enjoy the experience of encountering Shitecraft 500, although I have considerable experience of a lot of accounting systems including the market leader, SAP, and I'm sure I could be up to speed very quickly."

It's nearly as good as the Viz top tip for prospective employers, of throwing at least 50% of the Job Applications straight in the bin as you don't want to take the risk of hiring someone who is unlucky.

The fact is, all current accounting packages have a "Windows" front-end, accept balanced journal entries which can then be endlessly corrected, and dump the data in to a spreadsheet, mostly Excel, for manipulation and analysis, with reports and management accounts based on that and very very rarely anything direct from the package. The old skills of using the report writer facility of an accounting package are as yesterday and as clunky as the 8-track audio cassette.

Still it saves the agencies having to do anything much for their fees.

The Has-bean Counter
Posted by Hacked Off at 01:16 1 comment:

I have just turned 56, and I have had no paid work since September 2008. Things are less than wonderful and I am increasing hacked-off about being permanently skint.

I have a degree. I qualified as a Chartered Accountant with one of the Big Firms at their London offices, all first time exam passes, in 1983.

I've been through recessions before, but this one is different in that I'm the wrong side of some invisible age-related force-field which seemingly makes me unemployable. Of course, this is impossible, it's against the law to discriminate against prospective employees based on their age. Right!

Anyway, in between the pointless dancing around the Alice-in-Wonderland "support system" and sending e-mails to agencies which rarely get the courtesy of any response these days, I find I have a few minutes here and there to spare, so I have decided to vent my spleen with a blog.

It'll probably be sporadic. Mostly I suspect it'll be wearing less-than-rose-tinted spectacles. But it will make a change from complaining to the poor front-line staff at the DWP.

The Has-bean Counter
Posted by Hacked Off at 06:45 No comments: